What is the Longest Pokemon Name?

Some of the names bestowed upon our favorite Pokémon roll right off the tongue. Say it with us: Pikachu. The name sounds like the cutest sneeze ever heard. Or how about Squirtle? A classic, simple yet tasteful name for one of the coolest Pokémon.

Some Pokémon have extremely short names, like the all powerful Mew, or the slime covered Pokémon, Muk. These names bring the Pokémon that they represent to mind right away.

It is kind of worrisome though, for the other Pokémon whose names are a little bit…too much.

It is possible that some Pokémon names are way too long, confusing, and just plain hard to say. This could hurt them in their run for popularity, up against pros like Ekans and Arbok (“Snake” and “Kobra” backwards).

For example, what about Basculegion? Sure, the biggest Pokémon fans know Basculegion is a Water-type fish Pokémon that evolves from the fallen souls of the Basculin who could not withstand the strong river currents found in the Hisui region.

But to the average Pikachu or Eevee fan, Basculegion is just another mouthful ready to be changed once caught. Let's shine a spotlight upon the Pokémon with the longest names, lest they are forgotten to the ever expanding Pokédex.

Which Pokémon have the second longest name?

Let's start with the Pokémon that have eleven characters in their names, the second longest character count for Pokémon names, with the longest being twelve characters.

First up is Fletchinder. With a lengthy eleven characters in its name, the Fire-Bird type pokemon is not as easily recognizable as other bird Pokémon like Spearow, or Pidgey despite being entirely more interesting.

Next up is Corvisquire and its evolution, Corviknight. These medieval inspired bird type Pokémon are based on actual birds, like the raven, which are native to Great Britain, and are based on the iconic “dark knight”. Corviknight is one of two Pokémon on this list that has the ability to Gigantamax.

Gigantamax is a type of temporary transformation that only certain Pokémon can take on. By using the Dynamax ability, newly introduced in Pokémon Sword and Shield for the Nintendo Switch, Gigantamaxed Pokémon are actually distorted in the space they occupy allowing them to appear gigantic.

While this next Pokémon's appearance doesn't do itself any favors, its name won't either. Codenamed UB Burst, Blacephalon was first introduced in Pokemon Ultra Sun and Moon. This Pokémon is one of the nine extradimensional Ultra Beasts.

The Ultra Beasts hold knowledge well beyond human capabilities. Ultra Beast Pokémon like Blacephalon cannot be caught by any mere Pokéball. A Beast Ball will be required, unless anyone has any Master balls just lying around. Humanoid in design, this neon blue and pink clown-like Pokémon is stockpiled with nightmare fuel.

Barraskewda is pretty much just a barracuda, and one of the more recognizable Pokémon on this list, as it is common in nature, and easily obtainable in Pokemon Sword and Shield, as well as Brilliant Diamond and Shining Pearl. A favorite of the fisherman, the spearfish like Pokémon can be quite dangerous in a battle.

Centiskorch is the second Pokémon on this list that has the ability to Gigantamax, which blows the Bug-type Pokémon up to dragon-like scope allowing for a menacing centipedal experience.

Polteageist easily takes the cake as the cutest Pokémon on this list, and would go great with a slice too! This Ghost-type teapot Pokémon is evolved from its tea cup predecessor, Sinistea.

Polteageist is ornate in its design, and is overflowing with a possessed black tea ready to drag its opponent's from battle straight into Teatime, an ability only Polteageist is able to use.

Stonjourner, while not a bad idea for a rock band name, is actually a Rock-type Pokémon that looks like a piece of Stonehenge got up and started to walk around. While entirely capable of crushing many of the Pokémon that cross its path, this monumental Pokémon actually prefers a simple life of basking in the sun, waiting for the one day of the year where it can gather with the others of its kind to form a massive circle.

Mega Kangaskhan: Everyone's favorite marsupial Pokémon, was introduced during generation I, and can be Mega evolved into a massive version of itself using the Mega Stone known as Kangaskanite that's found in the Kalos region.

There is also Mega Aerodactyl, another Kanto classic named after the Pterodactyl. An ancient and fossilized Pokémon that, once reanimated from a piece of old amber and mega evolved, takes to the skies in colossal proportions.

The Pokemon with the Longest Name is Crabominable 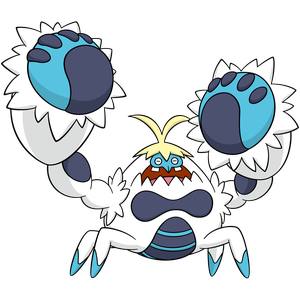 And without any further ado, the Pokémon with the longest name, coming in at a whopping twelve characters, it's Crabominable. This crustaceous creature is giant in size and almost entirely covered in snow white fur.

Native to tundra-like conditions, it is able to suck the cold into its crabby claws that it can fire at its enemies like frozen torpedoes. A clear reference to the “Abominable Snowman”, this Yeti influenced Pokémon takes the crown as the Pokémon with the longest name.

Many of these Pokémon have some amazing qualities, and others really get lost in the process of The Pokémon Company pumping out brand new Pokémon.

Many that grew up playing the games in the nineties feel that the newer generations of Pokémon are just rehashed versions of their old favorites. But they forget that everyone loves Pokémon, and that newer generations are falling in love with the twenty-six year old franchise.

It's not totally unlikely that a newer fan's favorite pokemon is Crabominable instead of Pikachu, even if Crabominable is kind of hard to say.

What is the Longest Anime Name?

Find out which anime titles have the longest names.

What country in Asia has the longest name?

Lots of countries in Asia have long names. Find out here which ones are the longest.