What is the bone in the body with the longest name? 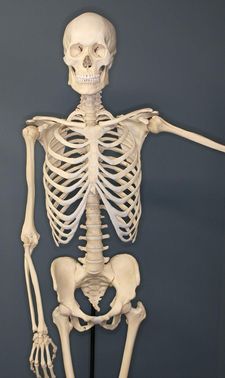 The human body has 206 bones and people always ask which bone is the shortest and longest of all but no one talks about the length of the names of the bones.

By knowing the longest & strongest bone as femur and shortest & lightest bone as stapes, we are just focusing on the long and short names of bones.

Bones with the longest name

Out of the whole skeleton, a bone from the foot, one of the tarsals, wedge shaped Intermediate cuneiform has the longest name with 21 letters. Word cuneiform refers to an ancient writing system used about 3400 BC because of its wedge shaped marks on clay pots and tablets. It is considered as the most primitive writing style even before Egyptians.

Other two are medial and lateral cuneiforms with 15 & 16 letters respectively.

In second place is inferior nasal conchae at 20 characters long. These conchae helps to filter, warming or humidifying the air we breathe in.

Next comes coccygeal vertebrae, with 18 letters. This vertebrae attached with Coccyx, relatively short name with 5 characters, also known as tail bone. According to the theory of evolution, our ancestors had tail which was used to balance but as humans learnt walking on two legs, tails became rudimentary. Still it is considered that tail bone i.e. coccyx is helpful in seating position because of its tripod like function with ischial tuberosities as the other two arms.

Thoracic vertebrae with 17 letters. These are connected with the ribcage protecting vital organs i.e. heart, lungs, liver in the human body.

Lumbar vertebrae with 15 letters. It is the largest segment of the vertebral column between thorax and pelvis supporting body weight and maintaining posture.

Sacral vertebrae with 15 letters. Origin of the name sacral also has an interesting story. Ancient Egyptians considered this bone as sacred bones because they protect the genitalia and was referred to Osiris, the God of Resurrection and Agriculture. Sacral and coccygeal vertebrae are also the cause of lower back pain.

Bones with the longest root name

Words like lateral, medial, inferior, superior, cervical, lumbar, thoracic etc. shows the location of particular bones. If we ignore these words by taking names of bones in the singular form and focusing on the basic names of bones we can say that Nasal Concha which is present in paired form on both sides of nasal cavity, has the longest name with 11 characters.

Bones like metacarpal, metatarsal, acetabulum, triquetrum each have 10 characters in its name securing the second position.

Metacarpals are the bones of palm of hand. It is the common name of 5 bones in each hand. Metatarsals are the bones of foot, 5 in number in each foot, which form arches of the bones, important for weight bearing and walking Acetabulum is the cup shaped notch formed by the fusion of hip bones (ileum, ischium, pubis). It is a socket for the head of femur while forming the hip joint.

The word triquetrum comes from 'triquetrus' meaning three cornered. It is one of the carpals having pyramidal shape helps in the movement of wrist. Other carpals are scaphoid, lunate (crescent shaped), trapezoid, pisiform (pea shaped), hamate (wedge shaped bone with a hook like process), capitate.

At third, zygomatic (diamond shaped cheek bone), occipital (forms the back and base of skull), trapezium (last of the wrist bones beneath the thumb), ( vital in the movement of wrist and hand) and navicular (boat shaped bone, one of the tarsals in the ankle of foot) mark their names with 9 characters in each word. Other tarsals are calcaneus, talus, cuboid and lateral, medial and intermediate cuneiform.

The calcaneus, bone with 9 letters , is the heel bone which is biggest among the tarsals.

Other root names of bones

Clavicle has names like beauty bone, collarbone and it is the bone mostly broken in children. One of its fractures is known as greenstick fracture because of resemblance to broken greenstick.

Humerus, bone of arm, 7 letters long, is known as the Funny bone because of ulnar nerve passing through the back of elbow can be trickled causing funny tingling sensations.

Scapula, with 7 letters, is a wing bone located at the back of shoulder connecting the upper limb with thorax.

Sternum, a flat bone in front of the chest at the centre with 7 letters. It is considered as the first bone to evolve in vertebrates.

The rib has 3 letters and ulna is 4 characters long, so they are shortest names in the human skeleton.

It is mentioned in the Guinness Book of world Record, Cathie Jung got her waist down to 15 inches by wearing corsets daily. These type of wearings clinch the ribs and inner organs together.

Hyoid is the only bone which is not articulating with any other bone so it is known as lonely bone. Has only 5 letters in its name.

Radius is important in supination and pronation of forearm around an axis. It contains 6 letters.

Tibia and femur has also 5 letters in their names while fibula is 6 characters long. These are the bones of lower limb.

We hope you enjoyed our article about the longest bone names. As mentioned, the intermediate cuneiform is the bone with the longest name.

Which human organ has the longest name?